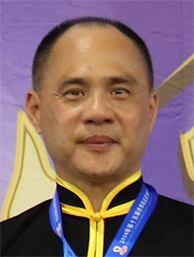 And also several silver and brown medals from the above listed competitions.

Master Harvey Lee is an internal style martial art instructor with over three decades of teaching experience in Australia.

Fundamental to Lee’s system of training are the soft essence of Tai Chi Quan and the explosive power of Cannon fist (San Huang Pao Cui Quan ). For those who practice Tai Chi Quan as a martial art, his training system also includes Tai Chi push hands, and boxing drills and sparring that are based on the internal style concept.